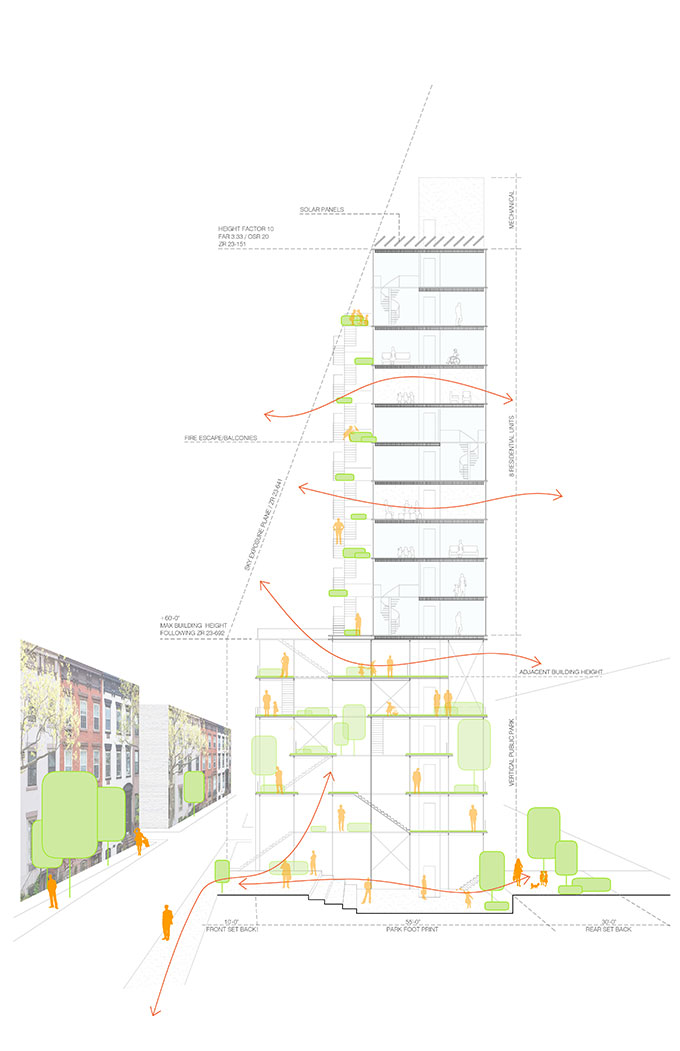 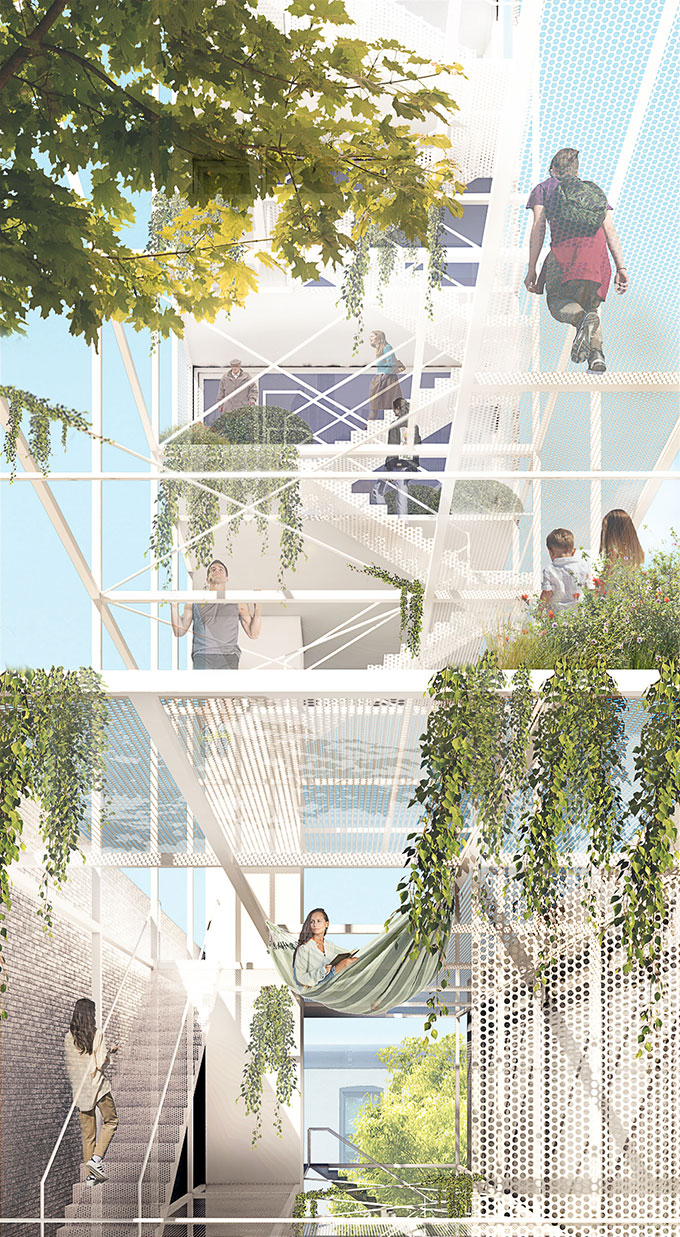 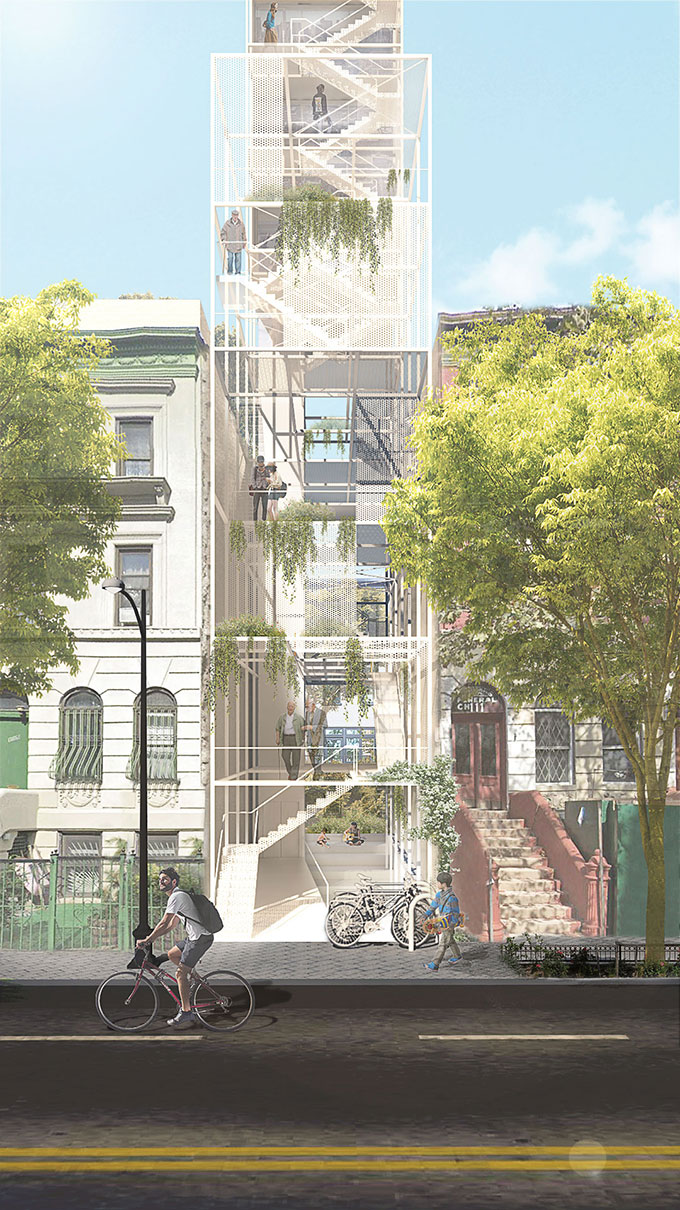 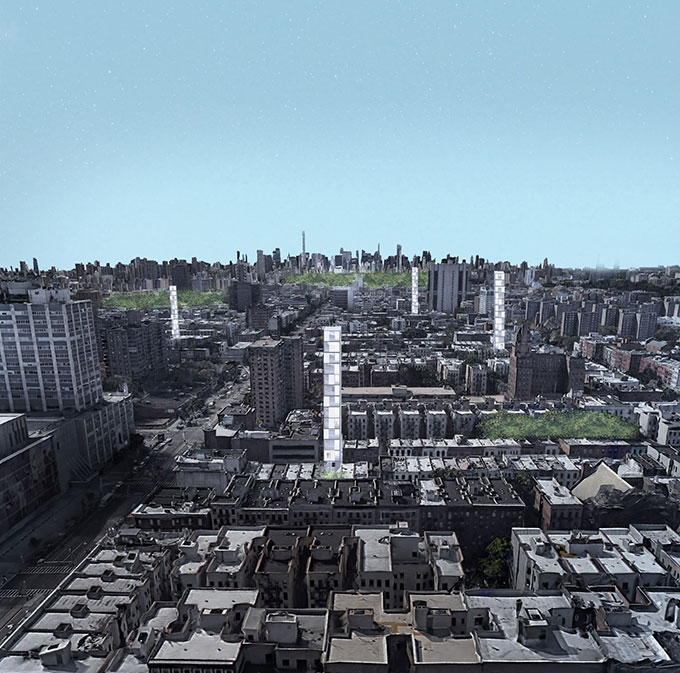 These small lots offer an opportunity to revitalize the neighborhoods and the city through socially oriented interventions. They become new vibrant destination, inspiring public gathering and housing alike in a dynamic and interactive way for both neighbors and visitors. They welcome visitors of all ages in an open and inviting environment. They take center stage rather than blending with the urban context. Thus they become reference points, flagpoles of sort for the neighborhood and throughout the city. The goal of our intervention is to maximize both affordable housing units and public space: we achieved that by minimizing the footprint of our residential typology and developing it vertically to the max FAR allowed. This move not only guarantees to achieve a larger number of apartment units, but at the same time provides a wider number of much needed public parks.

Our inspiration comes from the public spaces that occasionally break the urban grid throughout midtown and the financial district, as well as from the tiny community gardens spread out through the city’s neighborhoods.
We believe that all the iconic and most successful modern buildings in NYC have dealt with public spaces.
The Guggenheim, the Breuer’s Whitney, the Seagram building, all of them have been designed to engage the city, to offer public space. They either don’t align with the city grid or their shapes have been carved so to create dynamic, unexpected and vital public spaces. They all generate a “suction” effect. We want to achieve the same: we envision a vertical public park as the filter between the public and the more private affordable residential units, thus encouraging interaction between the neighbors and the residents. A porous vertical park: a maze of passages, stairs, ramps and green plates all accessible to the public. It pulls visitors in, it encourages interaction, it welcomes kids as well as seniors, it offers equipment for games and workout. It’s the ideal space for lunch breaks as well as business interviews. Our residential intervention begins only above this garden in the form of a skinny tower, setback from the street line so to maximize FAR and minimize footprint. The tower typology takes clear inspiration from the recent boom of high end residential towers throughout the city: except that ours is dedicated to affordable housing.

From marks in the land to Landmarks.

We maintain the existing narrow lots as publicly accessible spaces in the form of multi-leveled parks. The land belongs to the city: it will remain with the city in the form of public parks up to the maximum height allowed by zoning for residential use. According to ZR-23-692, “Height Limitations on Narrow Buildings or Enlargements” in Zoning District R7-2 portions of building with street walls less than 45 feet in width shall not be permitted above the height equal to the width of the street on which such street walls front or 100 feet, whichever is less. The property on 113 West 136th Street is facing a narrow, 60’-0” wide street and thus is limited to 60 feet in height. We decided to challenge this rule by choosing to maximize the open space and give the city the property back by introducing a public park within the allowable envelope. The residential tower like typology will hover above the park like a flagpole.

Our project takes inspiration from the simple scaffolding system: a grid that remains open or gets filled based on given programs or needs of the moment. A flexible system that allows for pre-fabrication, easy assembly and equally easy dismantling. Steel posts and beams are assembled at set intervals and will receive pre-assembled stairs, platforms, ramps and micro living housing units as required by the program.
The system looks and feels deliberately temporary: it can be dismantled and reassembled where needed.

The Key Features of our intervention is to maintain the open space as it currently exists.
The concept is simple and works on all applicable sites. We are convinced that our conceptual approach of giving these tiny and often odd lots back to the city can be applied/replicated throughout these lots, but we also recognize that the tower typology might be replaced by different typologies throughout the various different lots. We believe that using these small or irregularly-shaped LOTS for building housing is vital as NYC is planning for a growing urban population. The city needs bigger quantities of affordable housing. But we also believe that the city needs more public spaces, and more parks. In this respect we believe our proposed mix of public park and accessible and porous residential buildings will help create a more equitable and affordable city.

The visibility of our intervention aims to raise awareness of a change in the direction of affordable housing.
Affordable housing buildings become reference points, flagpoles of sort for the neighborhood and throughout the city.